Threekit is committed to preserving the environment and leaving a positive environmental impact. We aim to achieve this by engaging with the NFT community in a capacity that fulfills this mission. As such, we only support NFTs on blockchains that are either non-proof-of-work (non-PoW) or intend to transition to non-PoW.

Why is this commitment from Threekit important? There's a critical motivator behind Threekit's environmental NFT commitment. One of the biggest criticisms of NFTs is that their use of cryptocurrency leaves a negative environmental impact.

Here, we'll take a closer look at these impacts and what the future holds, along with how Threekit can help shape a brighter future.

Keep in mind that this article won't deal with the basics of NFTs and cryptocurrency. For these details, turn to our quick guide to NFTs in the metaverse.

Today, the most popular cryptocurrencies on the market are "proof-of-work." These are highly efficient, but this efficiency comes at the cost of the environment.

What is Proof-of-Work (PoW)?

PoW is a consensus mechanism that enables secure transaction processing on the blockchain. "Proof" refers to the security this mechanism creates by requiring enormous distributed resource expenditure, which is the "work."

The reliance on "proof-of-work," or PoW, is the main cause of cryptocurrencies' negative environmental impact.

Bitcoin was the first cryptocurrency to introduce this concept. Since then, many first- and second-generation cryptocurrencies have adopted this concept, from Dogecoin and Litecoin to Ethereum, Monero and Kadena.

Miners compete on these blockchains to solve a series of mathematical problems in accordance with cryptographic hashing algorithms. Miners who manage to solve these problems prove that the transaction process is secure, culminating in a consensus.

Cryptocurrencies, largely because of the PoW algorithm, are highly inefficient. Threekit's environmental NFT commitment hopes to help change this.

For example, Bitcoin is 1,000,000 times less efficient than a traditional VISA transaction.

This is because Bitcoin uses around 120 to 170 terawatt-hours (TWh) of energy to process. Specifically, this much power applies to approximately 400,000 daily transactions.

Ethereum, which has half the market cap of Bitcoin as of December 29, 2021, uses only around half of the energy of Bitcoin. Ethereum requires around 60 TWh of energy every year while processing nearly 12 times as many transactions.

It's also around 12 times more efficient than Bitcoin regarding its PoW algorithm. However, it's still 100,000 times less efficient than a VISA transaction.

Other PoW cryptocurrencies are also inefficient and contribute negatively to the environment, but their impact isn't as severe as the effects of Bitcoin and Ethereum.

What is the environmental impact of this?

The environmental impact of cryptocurrencies on the PoW algorithm is huge.

Both Bitcoin and Ethereum collectively use 200 Terawatt hours of energy on an annual basis. This energy requires 20 gigawatts of sustained power.

To help put this into perspective, the world's largest hydroelectric power dam, China's Three Gorges Dam, produces a sustained 22 gigawatts, which is enough to sustain Ethereum and Bitcoin. The dam cost a total of $32 billion to construct and has caused tremendous disruption to the surrounding river system and landscape.

Another example that illustrates the gravity of cryptocurrency's power consumption is the consumption seen with the average large-sized nuclear power station.

The average station normally includes four reactors and generates a sustained four gigawatts. This means that Bitcoin and Ethereum require the power of around four fully-equipped nuclear power stations to operate.

The global power usage for all sources today is around 81991.5 TWh. 21670 TWh of this total is delegated to electrical consumption.

Based on these numbers, cryptocurrency accounts for 0.24% of the total global energy consumption and 1% of electrical consumption.

Threekit's environmental NFT commitment has pushed for the introduction and use of more efficient cryptocurrencies.

The inefficiencies of PoW cryptocurrencies have been known to the public for a long time. As a result, there have been several proposed solutions.

What is proof of stake (PoS)?

The most popular proposed solution to the PoW problem is the "proof of stake" (PoS) solution. Unlike PoW, PoS eliminates the need for resource expenditure, replacing it with the pledging of a large amount of existing cryptocurrency, the "stake," on the validity of the proposed resolution of the secure distributed consensus.

In other words, something needs to be at stake for others to trust validating transaction blocks. Validators who have something at stake could wind up losing it, which gives them the incentive to be truthful and keep the network consistently secure.

Cardano, Binance Coin, Solana, Avalanche and Polkadot are some of the most popular PoS cryptocurrencies in terms of market cap. While these new ones are at the forefront of the PoS transition, other legacy cryptocurrencies are looking to make the switch from PoW to PoS.

The biggest of these existing cryptocurrencies is Ethereum, the second most popular cryptocurrency on the market.

What is the environmental impact of PoS?

PoS removes the main resource expenditure from both mining and transactions. The creator of Ethereum has estimated that this cryptocurrency's energy consumption will decrease by 99% after adopting PoS in place of PoW.

This would mean that Ethereum's energy consumption would decrease from  60TWh per year to 60 megawatt-hours (MWh). At the same time, Ethereum would still have all of its primary features, including distributed blockchain-based consensus.

What the future holds for cryptocurrencies and the environment The first generation of cryptocurrencies has been extremely harmful to the environment, and the problem is widely recognized.

Because of this, there is a movement involving transitioning from PoW to PoS mechanisms and other more efficient methods. With the switch to PoW for Ethereum alone, the total impact of cryptocurrency on the environment should drop by up to 25%.

The cryptocurrency that's slowing PoS adoption most of all is Bitcoin. As the oldest and largest cryptocurrency on the market, it's also the one that consumes the largest amount of energy.

It doesn't currently have any plans in place to switch from PoW to PoS or any other efficient models. Because of this, Bitcoin will continue to negatively impact the environment, which means that cryptocurrency as a whole will remain one of the biggest contributors to environmental harm.

However, with the help of Threekit's environmental NFT commitment and other movements, this could soon change.

How we can have an impact

As mentioned, Threekit's environmental NFT commitment has the ability to contribute to a better environment. Specifically, Threekit can have an impact by selecting non-PoW or soon-to-be-non-PoW cryptocurrencies for any NFT work we do. This helps ensure that our money goes toward our beliefs and that we help shape a more sustainable future. Contact us today to learn more about our policies and services

Both Bitcoin and Ethereum collectively use 200 Terawatt hours of energy on an annual basis. This energy requires 20 gigawatts of sustained power.

How a 3D Furniture Configurator Makes Your Company More Eco-Friendly 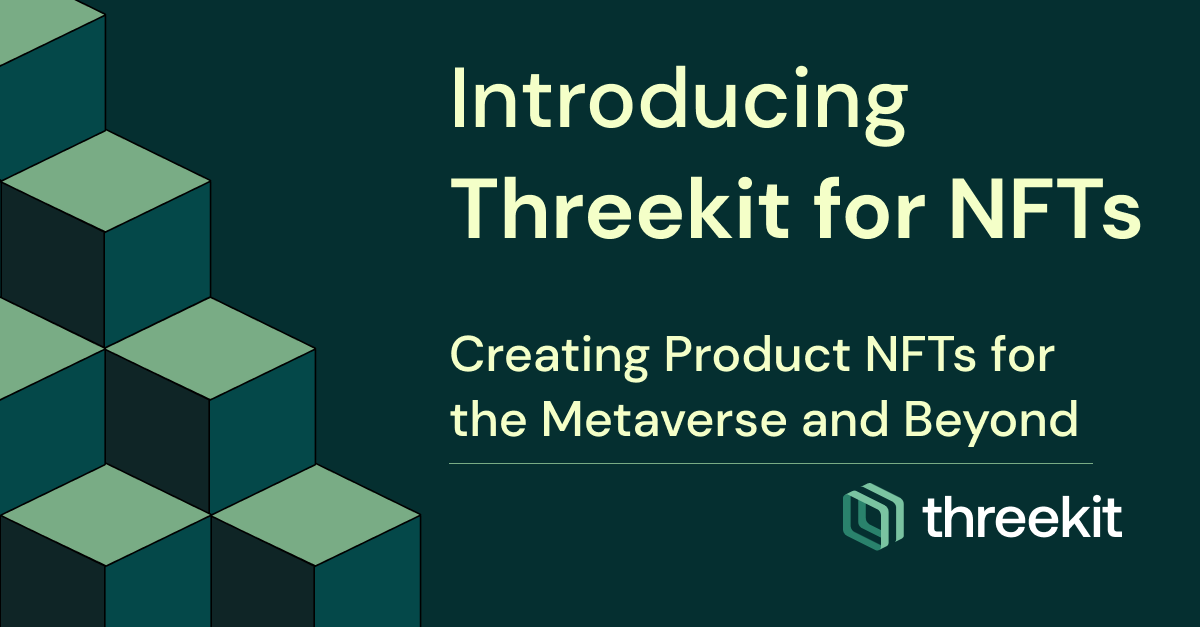 Threekit Announces Threekit for NFTs, Giving its Customers Entry into the Metaverse