To be fair, no one could have predicted exactly what was to come. Nevertheless, it's informative to take a look back at where the leading minds in eCommerce saw things headed. Let’s take a deeper dive into what that now-four-year-old Entrepreneur article got right about the future of AR and–just as importantly–what they got wrong. The IoT was hardly even a thing.

The article opens with a vision of the future that wasn’t quite inaccurate. It describes a world in which augmented reality will help our coffee makers keep an eye on our coffee inventory, monitoring every last ground, how much we drink on average, and more. We’re not quite there yet in the coffee maker category, but even when we arrive there it won’t be augmented reality that makes it possible. Eventually, smart homes may extend to that morning ritual, but augmented reality ended up becoming a useful tool in far different areas of eCommerce.

The future held a different viral sensation than expected.

To state the obvious, there’s no way this article could possibly have anticipated how or when a global pandemic might reshape the eCommerce world as we knew it. Let’s take a look at how it did–specifically, at how it affected augmented reality.

During the quarantine of 2020, for the first time in history, consumers were forced not only to stay home for an indefinite period of time, but also to do virtually all of their shopping on their desktops and smartphones. This dramatic shift completely upended traditional business and marketing models for every business and category. A few smart brands led the charge in conditioning consumers to expect far more from the eCommerce shopping experiences than they ever had before. While perusing a store’s inventory in-person at a brick-and-mortar store became a luxury rather than the norm, shoppers still wanted to get the closest possible look at what products were available to them. Technology rose to the occasion and provided what was perhaps an even more informative experience than an in-person look.

With the rise of augmented reality, more and more eCommerce shoppers became able to virtually try products on for size right in their actual spaces. This had a major impact on their overall opinion of brands. In fact, just a short year later a study found that 66% of consumers preferred retailers with AR experiences. 2017 was so long ago that the Entrepreneur article didn’t even cite a statistic based on consumer expectations related to AR. Their statistic showed that 22% of venture capital was invested in AR.

The big players aren’t so big.

It’s understandable that most would have predicted at least a few of the big four–Amazon, Apple, Google and Facebook–would own the AR segment in eCommerce. And that’s precisely what the Entrepreneur article saw coming, specifically from Amazon and Apple. While Apple may have driven augmented reality innovation in the years since, they’re far from the king of the category. And while Amazon has some augmented reality capabilities, they don’t offer an exclusive app setting it apart from the competition. In fact, the concerns about users having to select a small handful of apps to make full use of augmented reality have long been a thing of the past.

Today, there are countless augmented reality experiences available right within the browser, which opened up the playing field for eCommerce businesses of all shapes, sizes and categories. 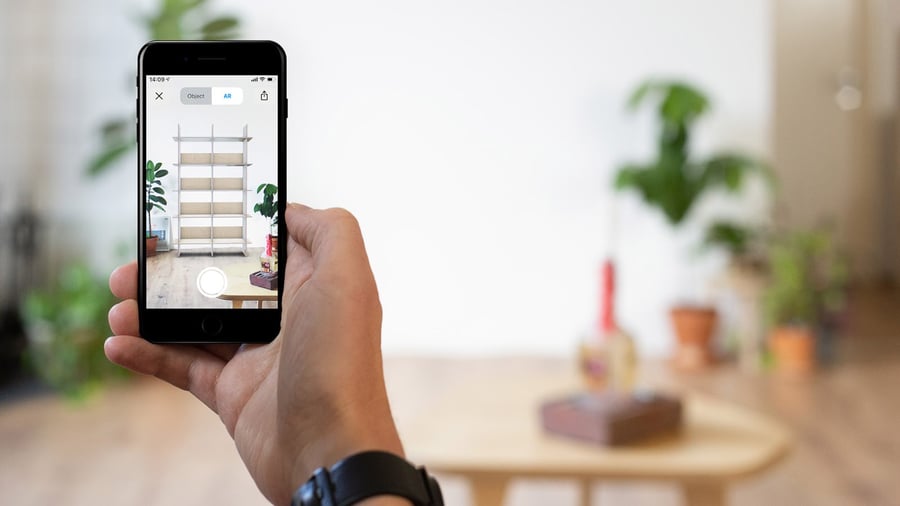 While this article was specifically examining AR related to eCommerce, it compared the technology at that time to another hot new tool of 2017. Virtual reality was going to single-handedly change the landscape of digital marketing, but as the article points out, it was already slow to develop. Today, virtual reality is as hot as ever–however, it has yet to find a presence in eCommerce. The technology has evolved a great deal in four years, but the experiences it provides are more entertaining than functional. Augmented reality has found more of a foothold in eCommerce for a few reasons.

For starters, it’s far easier to develop and can be accessed on devices users already own and know how to operate. The article mentions Facebook’s acquisition of Oculus. While that purchase was significant–and still is–the highly priced Oculus VR headsets are primarily used for gaming and rarely, if ever, used by brands to promote their product offerings.

Another feature of augmented reality that was a better fit for eCommerce than marketing is the fact that users imagine products in their actual spaces. As mentioned earlier, the pandemic conditioned people to do their shopping in their own spaces. Virtual reality is all about escaping our reality, and while appealing to a consumer’s aspirations can be effective, consumers are more likely to use a digital tool for shopping when it relates to their actual situation at that moment.

The platform possibilities are endless.

As mentioned earlier, the notion that augmented reality experiences require a time-consuming app download that takes up space in your tablet or smartphone is no longer accurate. In the years since Entrepreneur’s publication of “How Augmented Reality is Going to Transform eCommerce,” developers beyond the big four have been working tirelessly to ensure the best possible augmented reality experiences are available to users right within their smartphone browsers. This changed the game for eCommerce by making the technology as accessible as possible.

Today, there are plenty of options for brands to incorporate augmented reality into their digital marketing plans, from quick plug & play routes to outsourcing the job to a full-service digital agency. However, some platforms have stepped up to bring brands the best of both worlds.

Threekit made their mark by providing some of the highest quality 3D visuals available to digital marketers. Now, they’ve put those photorealistic digital renderings to even better use by incorporating them into highly scalable, highly configurable augmented reality experiences that are affordable and user-friendly. Unlike most augmented reality solutions that only offer a limited amount of product permutations, Threekit’s augmented reality experiences give shoppers the power to try out virtually tens of thousands of product varieties and see how they’ll fit in their space. More choices make consumers feel more confident, and when consumers feel confident, they’re far more likely to buy. 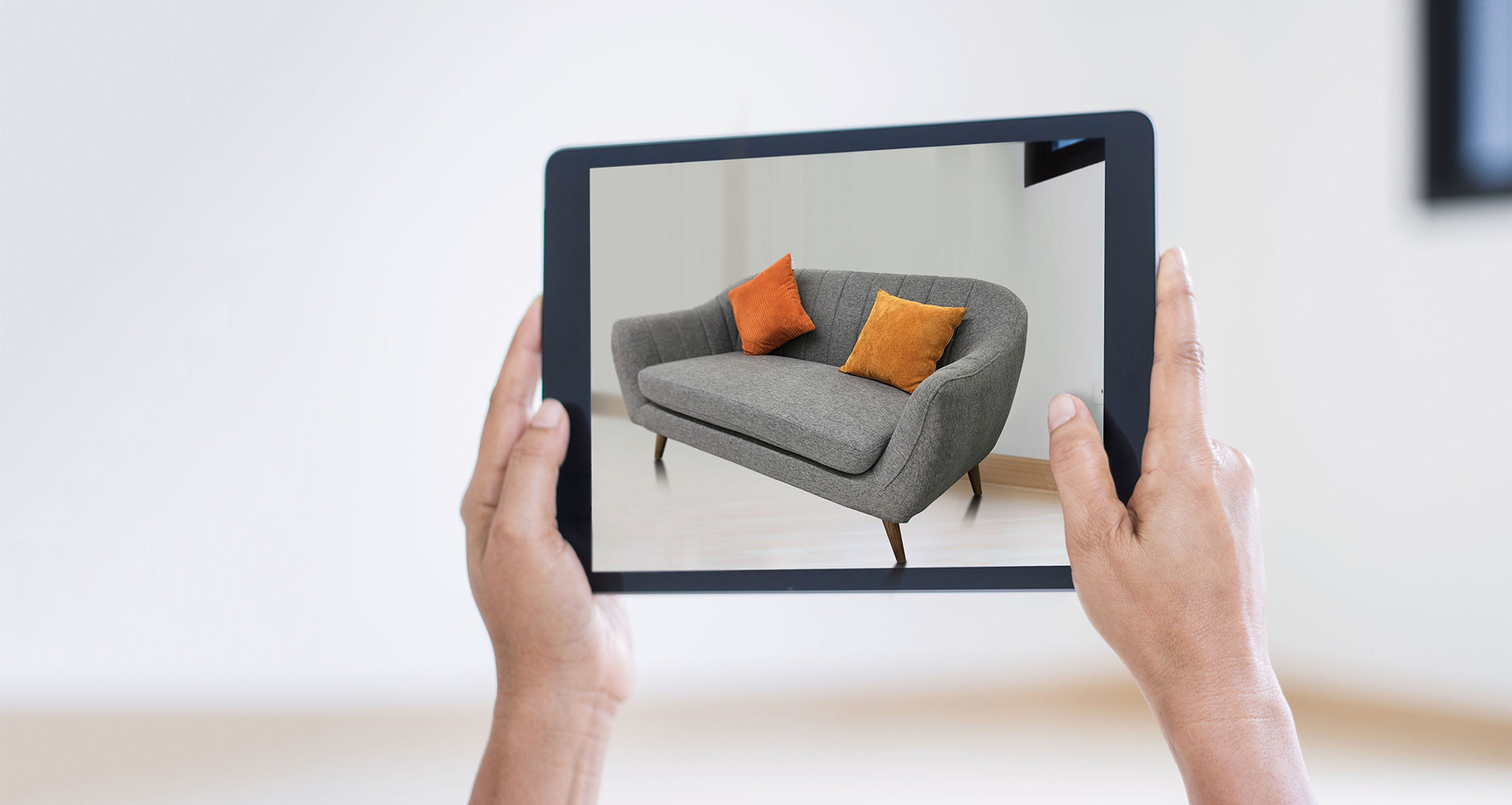 The team at Threekit has helped nearly every category up their augmented reality game, from home furniture, to office furniture, to apparel and beyond. There’s no end to the amount of categories that can benefit from a high-quality augmented reality experience. If a brand sells a physical product, their shoppers will want to see how it fits into their lives. Augmented reality was growing in 2017, and still is today–and the brands that aim to stay ahead of the curve will tap into a scalable solution sooner rather than later.

Ready to put your eCommerce brand ahead of the curve? Get in touch today for a consultation or demo.

Recent studies show that 40% of shoppers are willing to pay more with AR experiences as part of the eCommerce experience.

In today's world of eCommerce, 61% of consumers say they prefer retailers with AR experiences.